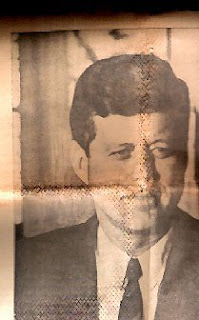 Mr. Bernard was the only male teacher at the small elementary school I attended. When we were told we'd be in his class back in 1963, there was a lot of giggling among the girls. A man for a teacher? And he was cute! It was almost unheard of then, but there he was standing before us ready to teach on the first day of school. He was just out of college, and we were his first students.

What my memories do hold is that Mr. Bernard followed my class right through high school. After our fifth grade year with him, he was transferred to the junior high that I eventually attended. There he taught science. Then he was transferred a few years later to our high school where he taught a variety of earth science and physics courses; he also coached track and cross-country.

I never had him as a teacher again after fifth grade, but he looked after his first class of students like a parent. He knew the names of our brothers and sisters. He knew our parents. It was like family. He even attended our graduation with his wife and new baby. I received a graduation card from him where he inserted a candid shot of me from fifth grade. When I ran into others who were in this fifth grade class, they also said they received graduation cards. Each had a black and white snapshot Mr. Bernard had saved. In those days, the world was smaller and less transient, so he was able to follow his first students through that point just as we were able to watch his life unfold.

What I remember most about fifth grade with Mr. Bernard is when John Kennedy was shot. My own children are now linked to the world with TVs and computers in their classrooms. If something happens, it is almost immediately known and they watch it on the classroom TV. In 1963, there was none of this. I think there was one television in the entire school building. The world was very different.

The memory is so vivid. I was sitting in the second row, second seat from the window. I was wearing a plaid dress with a white collar. I was wearing ankle socks. I hated that my mother made me wear ankle socks. I liked boys and boys made fun of girls who still wore ankle socks. Mr. Bernard was teasing my best friend about the pronunciation of the world "acre." She had read it aloud as "ac-ree." Apparently, she had never seen this word in print before, and she just couldn't see the word in her mind. We were all having fun. We were all learning. Perhaps I was thinking I might have pronounced it "ac-ree," too. My friend wasn't embarrassed; there was gentle teasing with Mr. Bernard in charge. And the realization that the word she'd struggling over was "acre" made my friend laugh at herself, without contempt, without feeling bad.

And then the principal was standing at the classroom door. He motioned for Mr. Bernard to come to him. They spoke for a few minutes; Mr. Bernard's back was to us. It was like one of those movies where frames are shown, slow motion, one still at a time. Mr. Bernard finally turned to us, and he was crying. Our teacher was crying. Then he told us about John Kennedy and the motorcade. He told us all he knew.

The rest is a blur. We were so young. The world back then for fifth graders was one filled with innocence. We silently followed Mr. Bernard to the auditorium where the larger room filled with each classroom of children, and we all watched and listened to the reports on a small black and white TV that was set in the middle of the stage.

Then, John Kennedy was dead.

We were dismissed early. My family's black and white portable TV stayed on all weekend. My mother cried a lot that weekend. I watched and cried as well, but I'm not sure ultimately what the pain was about. I can theorize today about the loss of innocence or the sadness in the world, but it was so long ago.

I was helping my mother dust our apartment when Jack Ruby became visible from the crush of people and shot Oswald. My memories are in slow motion and more of colors and sounds than of events. I remember our TV was light tan and on a gold rolling cart. I was wearing green pedal pushers. It's funny how I can see these details. My mother's hair was jet black at the time. Even though my mother usually had the record player on with her 33's playing Frank Sinatra or Tony Bennett, during that weekend, the sound recorded in my mind is that of news broadcasters' voices; Walter Cronkite for some reason is the voice I hear, but it could have been anyone.

Many times in my adult life, the words, "Where were you when Kennedy was shot?" have been part of our conversation. Everyone who was alive then has an answer and can tell a story. Perhaps every generation has an event like this. Maybe it was my first time being aware that I was connected to the world, and the world wasn't a perfect place made up of perfect people, and the ultimate sadness that thoughts like this bring.

I remember dating a man for awhile before I met my husband. He was taking me to meet his older sister and her husband.

"Where were you when Kennedy was shot?" someone asked.

"I was driving to work, listening to the radio."

"I was watching TV."

"I was in Mr. Bernard's fifth grade class. It was the first time I saw a man cry."

©1999 Felice Prager. All Rights Reserved.
----
Previously published by the Front Porch and Loti.com.
Posted by Felice Prager at 9:42 AM

My Ever Steepening Learning Curve

(Originally Published by The Irascible Professor - September 9, 2008)
Posted by Felice Prager at 3:25 AM