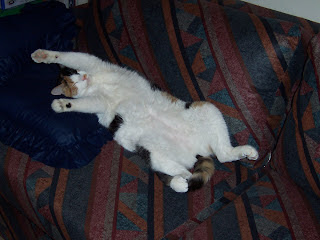 Normally, my cats leave fur and furballs in their wake as signs that they are alive and well. Occasionally, I will see them stampeding down the hall after an unsuspecting moth that inadvertently flew through an open door. A few weeks ago, I watched as ButtercupOfTunafish sat by my closed front door, waiting patiently while a scorpion pushed its way through the tight seal into our cool, air-conditioned home; then she smashed it. However, since the release of the Cat Challenge List, my cats have been hiding under beds. They are depressed and embarrassed because their score was too low to make the list.

It is all my fault.

I have considered hiding under the bed with my cats.

Several months ago, my inner cat woman wanted to know where my five furry felines ranked compared to other cats. In other words, I wanted to know if I was providing my cats with the best home available. I decided to test them.

Over the years, I have tried to provide my cats with the best possible stimulation. I talk to my cats and include them in family activities. They have the best learning toys including a five-foot high, multi-level condominium. They even have a box filled with shiny wrapping paper that will not tear. I hide treats in the box so the cats can find them. My house may look like a jungle, but my priority is providing the best possible learning environment for my kitties.

On test day, Samson, ButtercupOfTunafish, CleopatraQueenOfDenial, and Zorro let me test them. Peaches, on the other hand, did not cooperate; she would not leave her food bowl long enough to take the test. Peaches likes to eat. She excels in eating. She does not excel in testing or cooperating. (Peaches is large, but we call her extra medium so as not to affect her self-esteem. Peaches always feels good about herself.)

Thus, four cats took the test out of a possible five. That is the information I used in my evaluation. I did not consider how the cats actually performed on the test; I just used the fact that they took it.

This is similar to the method used in NEWSWEEK’s “Best American High Schools” list. I figured if the method was good enough for NEWSWEEK, then it was good enough for my cats.
The formula for the “Best American High Schools” list was created by Jay Mathews, a Washington Post reporter and NEWSWEEK contributing editor; he has been creating this list for NEWSWEEK since 1998. According to Mathews, “We take the total number of Advanced Placement, International Baccalaureate, or Cambridge tests given at a school in May, and divide by the number of seniors graduating in May or June.” That is the only data used to determine placement on the list. Performance on each test was not a factor. According to Mathews, “If I could quantify all those other things in a meaningful way, I would give it a try. But teacher quality, extracurricular activities and other important factors are too subjective for a ranked list. Participation in challenging courses, on the other hand, can be counted.” Mathews claims, “I decided not to count passing rates in the way schools had done in the past because I found that most American high schools kept those rates artificially high by allowing only top students to take the courses. In some other instances, they opened the courses to all but encouraged only the best students to take the tests.”
With my cats, I permitted all of the cats to take the test since all are permitted to participate in the advanced stimulation I provide. I did not count their performance on the tests. I just counted who took the test vs. how many cats I have. If only Peaches would have participated, my cats would have been at the top of the list. However, twenty percent of my cats chose to nibble on Tasty Feast instead. Twenty percent of my cats slept with her face in the food bowl.
Mathews has also stated that, “Test scores, the usual way of rating schools, are in nearly every case a measure of parental wealth and education, not good teaching. Every study shows that if your parents fill their house with books, include you in conversations and take you to plays and museums, you tend to score well on standardized tests even if your school is not the best.”
According to Mathews, my cats have an unfair advantage. I tend to go overboard when it comes to parenting. I spend money on stimulating cat toys before I spend money on things for myself.
When Mathews was asked why famous public schools (Stuyvesant in New York City, Thomas Jefferson in Fairfax County, Virginia, the Illinois Mathematics and Science Academy in Aurora, Illinois., or Whitney High in Cerritos, California) are not included on his list, Mathews reply was: “We do not include any magnet or charter high school that draws such a high concentration of top students that its average SAT or ACT score significantly exceeds the highest average for any normal-enrollment school in the country. This year, that meant such schools had to have an average SAT score below 1,300 on the reading and math sections, or an average ACT score below 27, to be included on the list…The high-performing schools we have excluded from the list all have great teachers, but research indicates that high SAT and ACT averages are much more an indication of the affluence of the students' parents.”
If Mathews was creating the Cat Challenge List, I suppose my home would have been disqualified. Not only do I provide my cats with extra stimulation, but I am a licensed teacher. Right there, my cats have an unfair advantage. Plus, it is a well-known fact that my cats are innately smart which further disqualifies them. I picked them out. They were the most active kitties in each of their respective litters. CleopatraQueenOfDenial tried to climb out of her cage right before our eyes and got to the top before her siblings!
Mathews had more rules and regulations for his NEWSWEEK list, but as soon as I realized my cats would be disqualified because of me, I stopped reading. I did not read the part about how many AP teachers disapprove of Mathew’s list. I did not read the part about all the think tanks that have made public statements denouncing Mathews’ findings. I did not read about how poorer school districts are paying the test fees for their students. I just tore up the magazine and stuffed each page into the cats’ shiny paper box for them to rip apart. They liked this. They came out from under the bed to show how they feel about my choice of reading material.
One more thing: as for labeling high schools the “best” in America, Mathews offered this explanation, “My list of best film directors may depend on Academy Award nominations. Yours may be based on ticket sales. I have been very clear about what I am measuring in these schools.”
Using Mathews’ logic, I have decided to create my own “best” list for my cats. I will judge them on how close they snuggle with me at night. The closer they snuggle, the higher they will be on the list.
Last night, Samson slept on my pillow above my head, CleopatraQueenOfDenial slept by my feet, Zorro slept on my left side, and ButtercupOfTunafish slept on my right side. Peaches slept right on my chest. It was hard to breathe, but I know she felt bad about the food bowl thing, so she chose to participate this time and I did not push her off.

(Originally Published by The Irascible Professor - May 2007)
Posted by Felice Prager at 8:46 AM