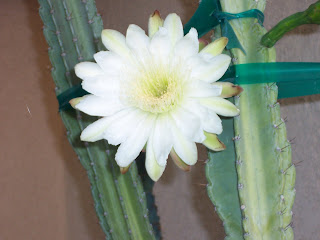 To some, a garden must be lush and green with flowers, plants, manicured lawns, bushes, hedges, and trees. We had one of those when we lived in New Jersey. Our chores included mowing, raking, trimming, removing weeds, and maintaining. It was a labor of love, and it looked beautiful.
When we moved to Arizona’s Sonoran Desert, however, we were aware that maintaining a garden would be nearly impossible. How could we get color in a backyard when water was a commodity and daily temperatures would burn most plants?
But when we built our house, the landscapers we hired tried to re-create New Jersey in our backyard – and we tried to maintain it. We had a lawn that we mowed when it was 110 degrees F. in the shade.
We filled bare patches with grass seed where the sun burned the old. We planted things only to realize that if something isn’t indigenous to the area, it’s difficult to keep it alive. We installed a drip-irrigation system, but one by one, our bushes and plants died.
Then we had a revelation. We decided that since we saw beauty in the desert, we would focus on that instead of trying to re-create what worked in another part of the country. We would have a picture-postcard desert paradise right in our own backyard.
The concept is called xeriscaping. The idea is to decrease the harsh effects of the desert climate and increase energy efficiency by understanding the challenges and options available.
We opted for the most minimalistic approach. We wanted our yard to look natural – like the desert it used to be before man stepped in. We wanted people to see our yard as a continuation of the desert arroyos adjacent to it.
We started by removing the lawn. It was not environmentally correct by any stretch of the imagination to use so much water. In its place, we decorated with sand, stones, and boulders.
We transplanted cacti that had outgrown pots and put them into the ground. We did research and learned which plants required full sunlight and which required shade or defused sunlight.
I opted for plants that needed little or no watering. The concept was that if it needed more than a bucket a month, it didn’t fit into the plan.
In fact, after planting the cacti, I became very aware of when we had rain or lacked it. I watered each plant (during the hot summer) on the first of the month – unless it had rained.
What I noticed over time was that I rarely had to water anything if it belonged in the desert. Natural rainfall was enough. Overwatering tended to rot the plants’ roots.
Cacti that grew just a little in pots, grew huge in the ground. Some even flowered, which hadn’t when they lived in pots. What started as rocks and some little plants is now a cactus garden of enviable proportions.
Many cacti also have another positive trait. If a cactus becomes overgrown, you can carefully remove a piece of it and plant it elsewhere. These cuttings grow into brand-new plants. In fact, if someone is visiting and comments on my cactus garden, I say, “Which is your favorite?” and I send them home with a cutting from it.
Like most Arizonans, we also have a swimming pool, which most of us who live in the desert find to be a necessity when it’s 115 degrees F. outside. Having xeriscaping helps me feel less guilty about the water a pool uses.
My favorite of all my plants is my cereus in the front of my house. When we planted it about 20 years ago, it was roughly 18 inches high and had only one stalk.
I have a photo somewhere of my sons standing next to it on the first day of school – both pretty miserable because vacation is over. In the photo, both boys are taller than the plant was at the time.
Today, the plant is taller than my house and has about 20 arms. I watch this plant more than all the others. It often gets scattered buds on the various arms. As these become larger, they bloom. The last time the cereus flowered, we had 61 flowers – yes, I counted – a few opened every night.
It takes about 10 days from start to finish for one bud to become a flower. The flower opens slowly at sunset into a five-inch white flower. I’ve read that bats like them. In the morning, bees are drinking their last taste of nectar, and by about 8 a.m., when the sun is on them, they have completed their life cycle.
One morning, I went out to get the newspaper and there was one flower opened. As I stood and admired it, a new neighbor walked by with her dog. She asked me what type of plant it was and I told her. She said that she planned to relandscape her property with a more natural look than the previous owners had.
Later that day, I went to her house and handed her a small cutting from my cereus plant. I explained the plant’s history, and together we planted it in her front yard.
When she asked me what she had to do to keep it alive, I told her the truth: “Leave it alone. Admire it. Appreciate the beauty of the desert.”