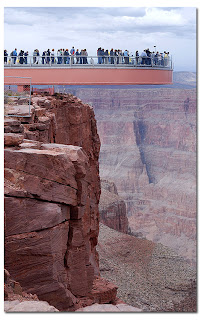 Before the Grand Canyon Skywalk even opened to the public, more than 2500 articles appeared about it in Great Britain, Germany, Italy, Japan, France, Australia, the United States, and other places around the world. Before anyone stepped out onto the cantilevered glass bridge, Popular Mechanics called it the “best of what’s new” in engineering. Ultimately, the Grand Canyon Skywalk has a lot of hype to live up to, and its fate will be determined by how tourists react to this new attraction. It has received a huge amount of national and international media attention, including having astronaut Buzz Aldrin lead the first walkers onto the Grand Canyon Glass Skywalk in a private ceremony on March 20, 2007. Since March 28, 2007, Grand Canyon Skywalk’s opening day, the lines to get onto the glass bridge have been long and interest has remained strong - despite the heat, the cost, the conditions in this remote area of Arizona, and the controversy surrounding the construction.
The Grand Canyon Skywalk is located at Grand Canyon West on the Hualapai Indian Reservation. It is not in Grand Canyon National Park as many have thought it was. In fact, it is a 3-hour drive from Las Vegas through Hoover Dam, a 6-hour drive from Phoenix through Wickenburg and Kingman, and a 5-hour drive from the Grand Canyon’s South Rim. Geographically speaking it is located approximately halfway between Las Vegas and the South Rim, but it is not easy getting there.
No matter what route you take, Dolan Springs Diamond Bar Road is at the end of your trip. This is a 15-mile unpaved and deeply rutted road. Since car rental agencies consider this off-road travel, you will be held liable if any damage to your vehicle is incurred. In addition, unless you are an off-road savvy driver or passenger, this is not for everyone.
Many who have visited Grand Canyon West’s Skywalk have opted to take advantage of a Park and Ride Shuttle Service offered from the Grand Canyon West Welcome Center located near Meadview, Arizona. This costs $10 per person and reservations are required.
There is also an entry fee of $49 per person into Grand Canyon West. This is called the “Spirit Package” which includes a permit to enter the area, photo opportunities with members of the Hualapai tribe in ceremonial regalia, Native American performances, transportation to a non-working mine and the glass bridge, and an all-you-can-eat western style buffet lunch. There are upgrades available to this package that include rim-side Hummer tours and horseback riding, helicopter rides down to the Colorado River, and pontoon trips on the river. These upgrades cost between $50 and $200 per person.
None of these fees includes actually walking onto the Grand Canyon Skywalk. That costs an additional $25 per person. Thus, the minimum cost for this excursion, is $75 per person. For the adventurous, it could wind up costing several hundred dollars per person.
The Skywalk is a U-shaped glass bridge jutting 70 feet past the rim of the Grand Canyon. The other side of the Canyon can be seen three miles away. The bridge is advertised as being 4000 feet high although it is said to be only about 2000 feet from the bridge to the Colorado River below which is already high above sea level. The Skywalk is not directly above the main canyon, Granite Gorge, which contains the Colorado River, but instead extends over a side canyon. The walls and floor are built from glass that is 4 inches thick. According to the press, the Skywalk is capable of holding 70 tons of weight, or the equivalent of 800 people weighing 175 pounds each. However, the permitted capacity on the Skywalk is limited to 120 persons at a time. Promotions claim that the Skywalk is sturdy enough to hold the weight of a dozen fully loaded 747’s, and strong enough to withstand winds up to 100 miles per hour and earthquakes.
Before stepping onto the glass walkway, all cameras, cell phones, keys, and other personal belongings must be surrendered so as not to puncture or scratch the glass. Visitors are given booties to wear over their shoes for the same purpose. Though the tourist is invited to bring cameras to the Skywalk, these are not permitted on the bridge. Souvenir photographs are available for sale.
Many visitors have been disappointed with the differences between the artist renderings and advertisements of the Skywalk and what the Skywalk actually is like. It is not as picturesque as the original well-know Grand Canyon National Park but it is still awe-inspiring.

To the dismay of many travelers, the site itself is also not developed yet as it is a work-in-progress. Those who have spent the money to see and walk on the bridge claim it looks more like a construction site. The site has at least 15 more years of construction ahead of it, at a minimum, to get it to be as the builders envision it.

There is also no nearby lodging available at this time. Tourists must go to Kingman which is one and a half hours away or to Laughlin or Las Vegas which is further just to find hotels. Some have opted to travel from Las Vegas or the South Rim via airplane tours to avoid the difficulties in finding lodging at the site.

To date, the Skywalk has experience long lines in blistering heat. Grand Canyon West is considerably hotter than Grand Canyon National Park. Since it is so far from civilization, there has been a shortage of water and food at times.
It is hoped that Grand Canyon West’s Skywalk Project will give an economic boost to the Hualapai Indian Tribe, who have battled widespread unemployment and poverty for decades. That is their dream though it is still far off. The concept was the dream of Las Vegas entrepreneur, David Jin, who, with the help of Las Vegas design firm, Lochsa Engineering, came up with this project.
According to Hualapai officials, the cost of the Skywalk alone will exceed $40 million when it is complete. This includes nothing but the Skywalk. Future plans for the Grand Canyon Skywalk Complex include a museum, movie theater, VIP lounge, gift shop, and several restaurants including a high-end restaurant called The Skywalk Café where visitors will be able to dine outdoors at the canyon's rim. The Skywalk is the cornerstone of a larger plan by the Hualapai tribe, which it hopes will be the catalyst for a 9,000-acre development to be called Grand Canyon West. This would open up a 100-mile stretch along the canyon's South Rim and include hotels, restaurants, a golf course, and cable cars to ferry visitors from the canyon rim to the Colorado River, which has been previously inaccessible. There are obvious protests to the environmental impact of such a project.
For varying reasons such as the above mentioned, there has been controversy about this project. From Native Americans to environmentalists, the project has been criticized.

Thus, the new Grand Canyon Skywalk has several shortcomings:
It is a long drive from anywhere.
Once you get there, the last 15 miles are bumpy and unpaved.
It is not in Grand Canyon National Park and the views are not as spectacular.
It is expensive.
Cameras are not permitted on the Skywalk.
Tourists are advised to bring sun protections (hat, sunglasses, and sunscreen) because the wait on the lines is long in the intense heat.
The project is environmentally unpopular.
It is a work in progress and resembles a construction site.
If tourists are willing to travel, brave the elements, and cover the cost of this excursion for a once-in-a-lifetime experience, it is important to understand the above variables before they go. Otherwise, it might be a better choice to wait for the site to be better developed.
That’s up to the individual tourist.
- - -
(This essay was published at DesertUSA.com in 2007.)
©2002, Felice Prager. All Rights Reserved. This blog is copyright protected. No item on this blog, including this essay or any photographs, may be used without the author's express written permission.
Posted by Felice Prager at 9:24 AM